HE’S A CUT ABOVE

URBANA — Frank and Dolores Limentato’s eyes were beaming above their masks as their firstborn child was sworn in Monday as Champaign County’s newest circuit judge.

“Oh, yeah,” Frank Limentato said, drawing out each word in response to the “are you a proud parent” question.

The Sicilian immigrant who sent 8-yearold Sam Limentato to the bank with the daily deposits from his Oak Park barbershop said his son was “a big help.”

“I never understood it,” he said of his child’s ability to multitask.

That included sweeping the floor, running the cash register, reading his library book, watching the Cubs and running to the bank, often in the span of minutes. His service frequently netted Sam tips from grateful customers.

The 50-year-old Limentato credited the work ethic of his father, who retired after 60 years of cutting hair, with setting a standard he hopes to bring to the courtroom as he fills the post vacated by the retirement last month of Heidi Ladd.

“Each customer was treated with the exact same amount of time and respect … regardless of how much hair needed to be cut,” he said. 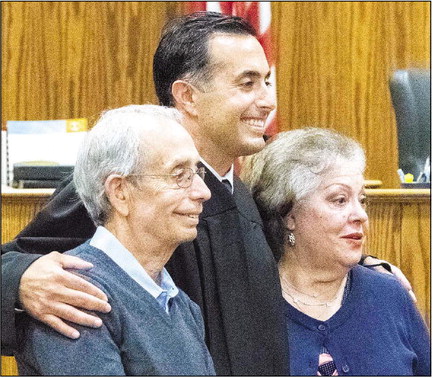 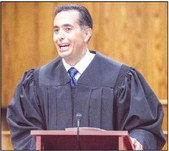 ABOVE: Newly sworn-in circuit court Judge Sam Limentato and parents Frank, left, and Dolores pose after the ceremony Monday at the Champaign County Courthouse in Urbana.

Limentato has been an attorney since 1994; he’s had a robust civil practice in Champaign with Ken Torricelli for the last 20 years. He will take on the family-law docket that Judge Randy Rosenbaum has administered for the last few years.

The recent retirements of Ladd and fellow jurist Jeff Ford have meant the shuffling of judicial assignments that will need even more tweaking this fall when Tom Difanis retires from the bench after 25 years as a judge and 19 as state’s attorney before that.

Following the congratulations and photos, Limentato had the lightest day he’ll probably have for a long time: a status check on one divorce and two other uncontested divorces.

His clerk, Tonya Stovall, who is breaking in her third judge, took no pity for the rest of the week.

“It’s a full week. She booked me up solid,” he said of the woman who previously worked for Arnold Blockman and Rosenbaum.

A 1994 graduate of the University of Illinois College of Law, Limentato has been married for 28 years to his wife, Cindy. They have four sons and one daughter ranging in age from 16 to 24.

Four of them — one is already away at college— sat in the jury box watching as their dad, who coached many of their sports teams, swore his oath then put on his robe with their mom’s help.

Going off script for just a second, Limentato called them “my favorite jury.”

Besides Ladd, there were 10 other judges from the Sixth Circuit present for Limentato’s swearing-in.

Among them was Ben Dyer, who was sworn in June 1 to fill Jeff Ford’s seat. He and Limentato were selected at the same time in May by Supreme Court Justice Rita Garman for their respective resident judgeships.

Both men will have to run in 2022 in Champaign County only for their seats. Limentato plans to run as a Republican and Dyer as a Democrat.

A few close masked friends and extended family of Limentato watched the ceremony in the courtroom while others were able to watch online because Difanis’ son and grandson, Matt and Gabe Difanis, recorded the event for YouTube.

Click here to see this page in the eEdition: